The B0pedo shape of the Hook-Ups body reduces the amount of movement to the whole rig on the seabed, the “Slims” Shape (available to purchase on the Hook-Ups Slims section) work well when you want the rig to “seek out” features on the seabed, or move more naturally with the tide.

The body is coated in our usual hard wearing plastic coating, and are now available in the following colours: Glow Green/Red, Pink/White, Orange/Black, Yellow/Pink, and White/Glow Green (the White glows Blue in the dark!) It has the swivel at each end and comes ready fitted with a split ring. The inshore Bodies come with 90lb b/s swivels and 100lb b/s split ring. The inshore range start at 4oz and go up to 8oz. 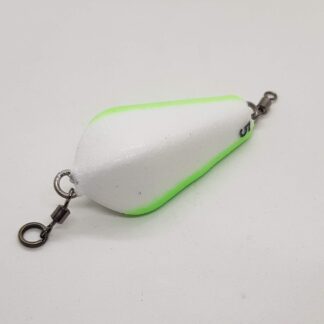